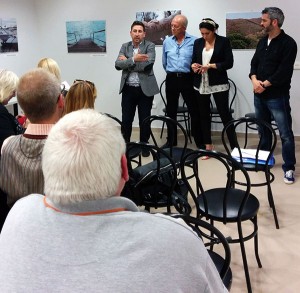 On Wednesday 23rd April Diego Urieta Mayor and his team from Foreigners Residents, Town Planning and Commerce held a local business forum at CIVIMA.  This meeting was an opportunity for local businesses to air their views and concerns, ask questions and brainstorm solutions to issues they are facing and find out how the Town Hall can help them.

Georgina Shaw of Shaw Marketing Services and Organizer of the monthly business networking meeting brought together local businesses to be part of the discussion representing legal, financial, hospitality, medical, golf, marketing and travel industries. This positive meeting discussed the key issues of parking, security, policing, planning office concerns and beach facilities opening earlier. The Town Hall informed the companies of what they were already doing to solve these issues, barriers to solving them and attendees brainstormed what the business community could do to help.

On the subject of parking, it was agreed that additional underground parking available in Manilva and Puerto de la Duquesa should be better signed and publicised, as not all parking is being utilised. Valentina Radu revealed that she is in talks with the police to change the road system slightly to create 40 new car parking spaces. It was also suggested by one of the attendees that businesses in the port could help themselves by getting staff to park outside the port to free up parking for customers.

A lot of the meeting was spent discussing the security situation for businesses, residents and tourists. It was revealed that the Town Hall have petitioned the National Police for permission to install CCTV at problem points. They have the budget to install this system, but are working to get permissions due to issues with privacy laws and they hope to have a solution soon.

The lack of police presence and the absence of a National Police Station in the area was also discussed. Valentina Radu explained that they are only allowed to employ one policeman per 1,000 residents on the padron and so they have the maximum amount they can for the officially registered population. The same issue applies to the National Police Station, as Manilva cannot have this facility until there are 20,000 people registered on the Padron. Looking at refuse figures, the Town Hall believes there are 20,000 residents here, however the official figures are much lower than this, so the key to this is getting more people on the Padron.

“People need to be aware that if they are not officially registered to live here that they are stopping the Town Hall from having the resources to implement the improved security that the area needs”,  Georgina Shaw from Shaw Marketing Services commented. “Signing up to the padron is really easy and it is not linked to the taxation system, or any other legal register, so there’s no reason not to do it. The Foreigners’ Department can help you do it if you don’t speak Spanish and we all need to encourage as many people to register as possible to get the budget and resources required to make Manilva an even better place to live and run a business.”

The Town Hall welcomes suggestions and comments from local residents and businesses and will be running more of these forums in the future. If you would like any issues concerning running and owning a business raised with the Town Hall please email manilva@shawmarketingservices.com or visit the Town Hall to speak to Valentina Radu. Richard Docker will also be visiting local businesses to find out their thoughts, if you would like him to visit your office please call 647 678 513.