Musical legends and artists Brian Travers from UB40 and John Illsley from Dire Straits are exclusively unveiling the artist proofs of their album covers at the Kempinski Hotel Bahía in Estepona on the 22nd of November 2018. These artworks are part of an exhibition of 20 pieces of the artists’ works, which will be on display at the hotel until the 10th of January 2019.

“For the Many” is UB40’s first studio album in six years and celebrates the bands 40th anniversary. The album cover is a tribute to Grenfell Tower survivors and is a representation of a whole skyline of Grenfell Towers with bright primary colours to express the strength and determination of the common man and the explosive, incredible force created when we work together and think of others. The style is a blend of contemporary comic book zeitgeist and street art and stands twelve feet wide and four feet high. The album cover uses a section of this strong painting and Brian Travers has created 40 limited edition prints, which will be on sale at the hotel during the exhibition. Other works that will be exhibited in this new show include the artist’s proof of “In Flanders Fields”, a tribute to the heroes of World War 1. 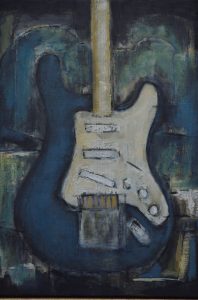 John Illsley from Dire Straits is also unveiling the artist’s proof of the painting which was featured on the 2008 album “Beautiful You”, an oil painting depicting a guitar on an abstract blue and white background. As well as this album cover, John is bringing nine other works, including two beautiful new abstract works called Puglia and Headland.

Both Brian Travers and John Illsley have always had a passion for painting, both of them studying at art school before getting into music. However, the rigours of recording and touring stopped them from producing the works they wanted to. Since taking a bit of a step back from the music, they have been focusing on their art projects, producing a wide range of wonderful works and exhibiting all around the world. They now combine their art and music and their powerful album covers show just how these two creative pursuits can come together.

The exhibition will be launched with a glamourous, rock and roll opening party on Thursday 22nd of November from 20.30-22.30, and both artists will be flying in to attend the event. This is a wonderful chance to meet these legends and learn about their art, their inspiration and their long and successful careers in music.

The exhibition launch event is free to attend, but numbers are strictly limited and reservations are required. Please email justine.haughey@kempinski.com to reserve your place. Art lovers are welcome to pop in to the hotel at any time to enjoy these wonderful works until the 10th of January. They are located in the gallery space to the right of the entrance.

RSVP: RSVP by email to justine.haughey@kempinski.com 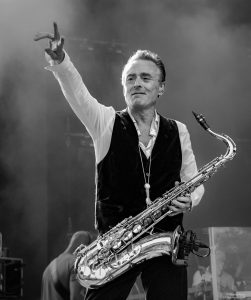 Brian Travers is perhaps best known as being a founder member and the saxophonist of the reggae band UB40. He has spent over 35 years both recording and touring during which they have sold over 120 million albums. Brian was educated at Birmingham’s Moseley School of Art. After 20 years residing in the rural Worcestershire, he returned to his roots in Moseley where he now paints ‘abstract’ canvases, Perspex sheets, stainless steel and creates painted glass and ceramic objet d’art.

John Illsley is an English musician who rose to fame as the bass guitarist of the critically acclaimed band Dire Straits. With Dire Straits, John has been the recipient of multiple BRIT and Grammy Awards and a Heritage Award. As one of the founding band members, with Mark Knopfler, his brother David and drummer Pick Withers, John played a major role in the development of the Dire Straits’ sound. During their time together as Dire Straits they sold over 120 million albums and toured extensively across the world. When Dire Straits took a couple of well earned breaks John released two albums; Never Told a Soul (1984) and Glass(1988). When Dire Straits finished touring in 1993 John became heavily involved in the Art world. Having carved a reputation for himself as a painter, John had solo exhibitions in London, New York, Sydney and across Europe. He is currently working on a new solo album which will be released next year, entitled “Coming up for air”.