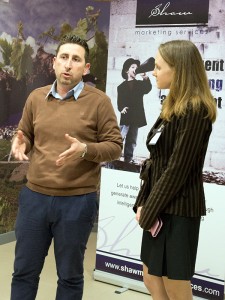 The Mayor of Manilva Introducing our charity networking event

As I explained in a previous blog post corporate social responsibility (CSR) is an excellent way to do good and benefit your business at the same time. It can be difficult to know how to put a CSR strategy in place, which is a good promotional tool, without being cynical or feeling like a manipulation of a positive action. My belief is that handled correctly, the objectives of the charity and the business can be fulfilled without conflict.

Here’s how we recently combined raising money for charity and promoting our own business and networking group to give you an insight into how it can work.

We have been running a monthly networking meeting in Manilva since September 2014, providing the local businesses with a promotional platform and supportive network to boost profits and open up new opportunities.

After four successful meetings, we felt we needed a promotional boost to increase our business database and ensure the long term viability of the group and also wanted to raise the profile of our marketing agency in the local area. We were put in touch with a local charity The Duquesa St George Charitable Association and thought it was a perfect match with our objectives.

We pushed hard promoting the event and the link with the charity, getting TV and radio interviews mainly due to the non-profit status of the event, as well as using it as an excuse to create a database and contact the local businesses by email and phone. We also invited Manilva’s Mayor to be present at the event, which added to the gravitas of the event, gave us a good contact with the local Town Hall and also boosted promotional opportunities.

As a result of our promotion, we had 46 people attend the event, raising 230€ for the charity and getting at least 20 new people to the event, as well as generating interest and capturing data of more than 30 new businesses in the local area. We also further promoted both the charity and our company by inviting the local paper to take images of the official handover of the funds in front of the charity’s shop to be published in April.

This has been a win-win for the charity, the networking group and our company and a good example of the benefits of Corporate Social Responsibility.